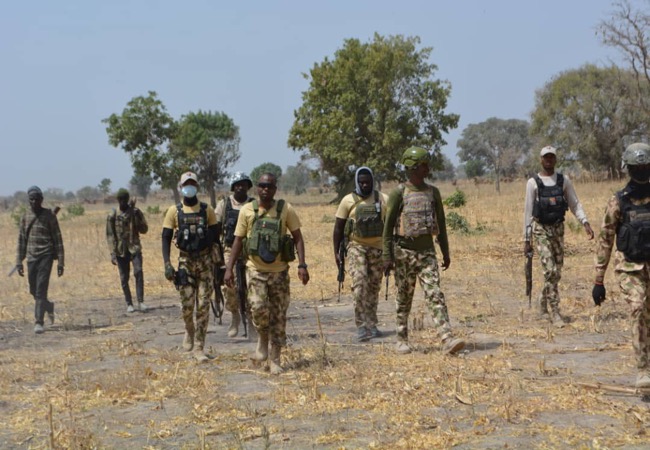 Operation Hadin Kai (OPHK) troops in conjunction with the Combined Joint Task Force (MNJTF) neutralized dozens of Boko Haram/Islamic State terrorists from the West Africa Province during operations to separate demining operations in Borno State and in a border town between Nigeria and the Republic of Niger.

Troops also captured two terrorists and rescued hostages from terrorist enclaves in GarimWanzan in the Republic of Niger.

According to the intelligence report, some of the terrorists were killed on Sunday after the troops staged an ambush against the terrorists in KasuwanDaula axis in Bama local government area.

An intelligence report obtained by counter-insurgency expert and security analyst, Zagazola Makama, in Lake Chad, which was made available to LEADERSHIP, revealed that the troops had achieved the feat by acting on the credible intelligence base indicating that some insurgent remnants were coming to the market to engage. in some operations.

According to him, the troops carrying out a long-range combat patrol caught wind of the terrorists’ rampant activities and watched them.

“In the ensuing battle, troops rained heavy fire on the terrorists, killing 7 people instantly while one escaped.

“The terrorist who escaped the onslaught, arrived at the camp of Abu Hassana, a senior commander of the terrorist group and told him that his men had been killed by Nigerian army troops.

“Abu Hassana quickly mobilized and moved towards Bama town where they attempted to attack the troops of the 21st Armored Brigade.

“Upon arriving at the scene around 6:40 p.m., the Boko Haram terrorists began firing sporadically, causing panic among the residents. Troops who were fortunately on alert responded with heavy fire forcing the insurgents to retreat and flee,” the sources said.

In the same vein, MNJTF troops fighting Boko Haram attacked a camp of Boko Haram terrorists in GarinWanzam in the Republic of Niger, killing many terrorists and rescuing hostages.

LEADERSHIP understood that the troops acted on credible intelligence that some insurgent remnants were abducting people and demanding ransom from them in the general area.

Sources said the surprise attack led to the killing of some of the terrorists and the successful rescue of the hostages who were later reunited with their families.

He said two of the terrorists were also captured alive, noting that troops had also recovered weapons, magazines and rocket-propelled grenades from the terrorists’ enclaves.