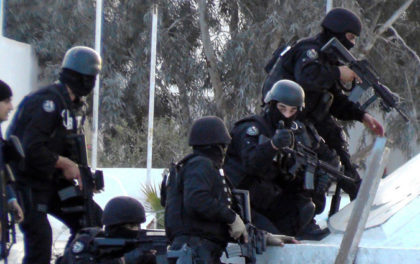 A group of terrorists exchanged gunfire with members of the Tunisian National Guard in Kairouan, in the north of the North African country, on Saturday.

Police said in a statement that gunmen in a car opened fire but were driven back by a “massive” retaliatory barrage, with no casualties reported in the exchange.

Those responsible for “this cowardly attack were probably… part of a terrorist cell“, operating between Kairouan and Sousse in eastern Tunisia, which had been dismantled with arrests, police added in the statement.

The attack took place on Tunisia’s Independence Day and the country plunged into a political crisis.

The cell, led by a terrorist unknown to the security services, indoctrinates young people in the region and plans to manufacture explosives and poisons for use in terrorist operations.

Tunisia has been in a state of emergency since November 2015 after the country suffered the bloodiest attacks in its history. That year, three terrorist attacks claimed by the Islamic State group killed more than 70 people, mostly foreign tourists.

North Africa Post’s news desk is staffed by reporters and editors, who are constantly working to deliver fresh and accurate stories to NAP readers.