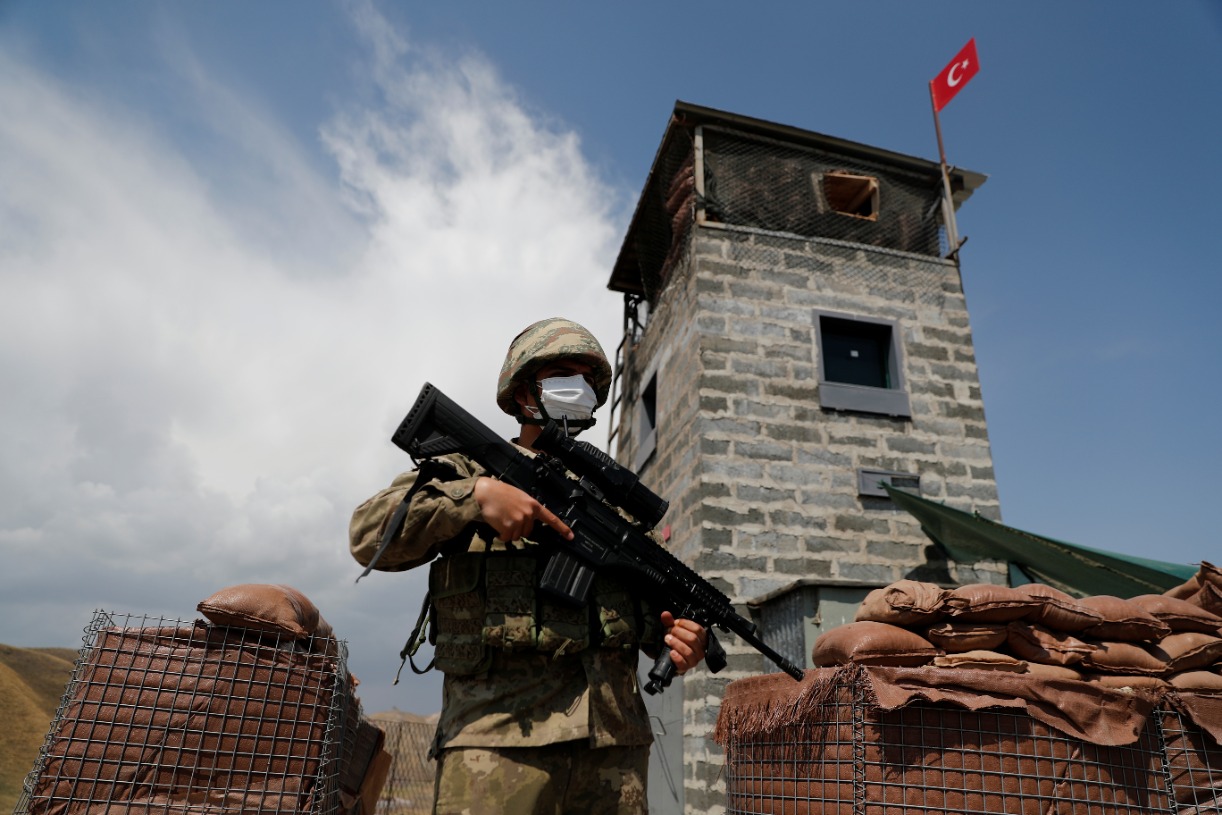 It has been more than five years since an Islamic State gunman opened fire on Reina nightclub in Istanbul, murder thirty-nine revelers from more than a dozen countries as they celebrated the New Year. The group has not carried out a significant attack in Turkey since, and international attention has been drawn elsewhere, captivated by the latest blood and blood. But while the West has focused on emerging and re-emerging threats in distant places, from sub-Saharan Africa to Afghanistan, a far more sophisticated and immediate danger simmers in Turkey. Given the extent of the Islamic State’s presence in Turkey, as well as the multitude of problems Facing the country, it is remarkable that the Turkish authorities have stayed the course so far. The question is how long this can last.

From the start, Turkey has been of crucial importance to the Islamic State. At the height of the caliphate-building project, foreign fighters were pouring into Syria and Iraq in droves. Most of them arrival passing through Turkey, where they were welcomed by animators who examined them and sometimes gave them coaching before smuggling them into what was then a badly kept frontier. But Turkey has always been much more than just a transit point and stopover for newcomers from outside the region. More than 6,500 Turkish citizens (including their family members) are said to have joined Islamic State, making it an important recruitment area and one of the biggest producers of foreign fighters in the world. In addition, the country quickly became a key financial and logistical center for the organization, allowing the Islamic State to acquire and move large amounts of money, weapons components, precursor explosive materials, and a variety of other services and Provisions. It is therefore hardly surprising, as the caliphate began to crumble in Syria, that the fallback position for many, including a number of senior leaders— was in Turkey.

At the time of the Reina nightclub attack, Ahmet Yayla, a former Turkish counterterrorism officer, valued that there were about 2,000 “hardcore” members of the Islamic State in Turkey (about the same number as the UN recently posed are in Afghanistan). Since then, this number seems to have increased considerably. As the fall of Raqqa loomed in the summer of 2017, Islamic State commanders educated their supporters to take refuge and await orders on the other side of the Turkish border. “Several hundred” Islamic State fighters and their family members were would have allowed to leave Raqqa under an agreement reached with the Kurds, and thousands more fled Syria in the months that followed. Although this was not the only destination they could travel to, it was perhaps the most attractive, and it is almost certain that many of these individuals hid in Turkey. Add to that the “thousands” of Turkish foreign fighters who income country of origin – few of which have been prosecuted – and it is clear that Turkey has a serious problem.

As the threat has metastasized, the number of counterterrorism operations has soared, supposedly approaching 1,000 per year, with dozens of suspects sometimes apprehended in a single raid. Among those arrested are the alleged military leader and “the man on the rightof Abu Bakr al-Baghdadi, who helped the former Islamic State leader hide in Idlib near the Turkish border; former Islamic State MP Minister education; and one of the Baghdadi wives and several of his relatives. The fact that these people lived in Turkey and, in some cases, went undetected until four years— is indicative of the ease with which the Islamic State has infiltrated Turkey and importance to the leadership of the organization.

As the crackdown has intensified, Turkish authorities have foiled a growing number of plots, including ambitious plans for mass attacks and kidnapping of public figures. Details are generally scarce and Turkish politicians sometimes muddy the waters with outlandish claims, but it is clear that the threat is real. Research by the West Point Counterterrorism Center has shown that Islamic State attack cells in Turkey have typically have been linked to the organization in Syria and Iraq, and have had frequent access to firearms and explosives. The same disturbing combination of operational connections and offensive capabilities has persisted despite the reduced presence of the Islamic State in Syria and Iraq. The sense of impending peril was such last October that the United States Mission in Turkey suspended consular services throughout the country and Posted a public alert, citing “credible reports” of potential terrorist attacks and kidnappings against US citizens and foreign nationals in Istanbul and elsewhere.

Along with Turkish counterterrorism efforts, the US Treasury has worked diligently behind the scenes to root out the financial infrastructure that the Islamic State and other jihadists rely on. This has resulted in an increasing number of designations of terrorist financiers, including a range of foreign exchange and money transfer businesses, the largest of which, Al-Khalidi Exchange, carried hundreds of thousands of dollars every day. Clearly, Turkey’s efforts to suppress terrorist financing have failed. This has led the Financial Action Task Force (FATF), a global financial watchdog, to place Turkey on its dreaded “gray listcountries that are deficient in the areas of anti-money laundering and counter-terrorism financing in October – a development that has exacerbated Turkey’s deepening economic crisis.

The FATF list addresses a more troubling concern. Although Ankara was quick to designate the Islamic State as a terrorist organization and join the global coalition to defeat it, Turkey has long been accused of negligence when it comes to jihadists. Eyebrows have again been raised that the leader of the Islamic State Abu Ibrahim al-Quraishi— just like his predecessor — was able to live hidden only a few kilometers from the Turkish border. There is no doubt that the Erdogan government has other counter-terrorism activities prioritiesforemost among them the Kurdistan Workers’ Party (PKK) and associated Kurdish militias, which are common enemies of the Islamic State. Equally, if not more, important is the Gülen movement – officially known as the Fethullah Terrorist Organization – which Turkey holds responsible for the 2016 coup attempt.

In comparison with the fervor with which these and other perceived threats are prosecuted, the fight against the Islamic State has been somewhat lackluster. Thus, despite the frequent raids, he appears that relatively little detained suspects are formally arrested and charged. Many, it seems, are simply published following their first declarations. When cases come to court, Turkish judges have been surprisingly lenient. A particularly striking example is the case of the Syrian cleric Jamal Abdul Rahman Alwi. Although he was accused of giving the order to burn two Turkish pilots alive in 2016, Alwi was released pending trial and only later arrested after public outcry. Many others, including senior Islamic State operatives, have benefited of the Turkish remorse law, which can lead to greatly reduced sentences or even suspended.

What happens to these individuals is murky. The Turkish authorities have deported a total of 8,585 terrorism suspects from 102 nationalities since 2011. However, this figure does not take into account Turkish citizens and also includes people seeking to join the PKK and other organizations. Few other details are known. Some suspects who cannot be imprisoned or deported are put under surveillance, but it seems highly unlikely that the security services, probably still recovering loss of thousands of experienced officials caught up in the anti-Gülenist purge – would be able to adequately monitor the suspects.

With the president’s popularity at an all-time low and elections fast approaching, the Islamic State is likely to become an even lower priority than it already is. The threat of terrorism has already cast a shadow over the upcoming elections after an improvised explosive device was find on a car belonging to a policeman assigned to an Erdogan rally. And though it has been since blame on the PKK, this only reinforces the existing hierarchical order. Yet, if history is anything to go by, the Islamic State will be just as much, if not more, of a problem in Turkey. The group has been particularly active in the run-up to the 2015 general election and is unlikely to pass up a similar opportunity. This does not bode well for the coming months.

Since 2017, Turkey has managed to do just enough to keep the Islamic State off balance. Although the counter-terrorism raids are carried out at a breakneck pace, they are superficially disruptive in nature. The border with Syria, although much narrower than it once was, remains permeable; funding for the fight against terrorism has been woefully insufficient; firearms and explosives seem to be readily available; and the conspiracy is widespread. Under mounting pressure from domestic challenges and with elections on the horizon, it seems unlikely that Turkey’s success will last.

It is also a problem for the international community. As a major tourist destination and international travel hub, including a flourishing trade in high-quality fake passports – Turkey is both an attractive target for terrorists itself and a potential launching ramp for transnational attacks. Colin Kahl, Undersecretary of Defense for Policy, caused a stir late last year when he Recount members of the Senate Armed Services Committee that the Islamic State affiliate in Afghanistan “could potentially” develop the capability to launch external attacks within six to 12 months. It is entirely possible that the Islamic State already has this capability in Turkey. Although attention is still largely focused elsewhere, it would therefore be wise to keep a close eye on “Wilayat Turkey.”