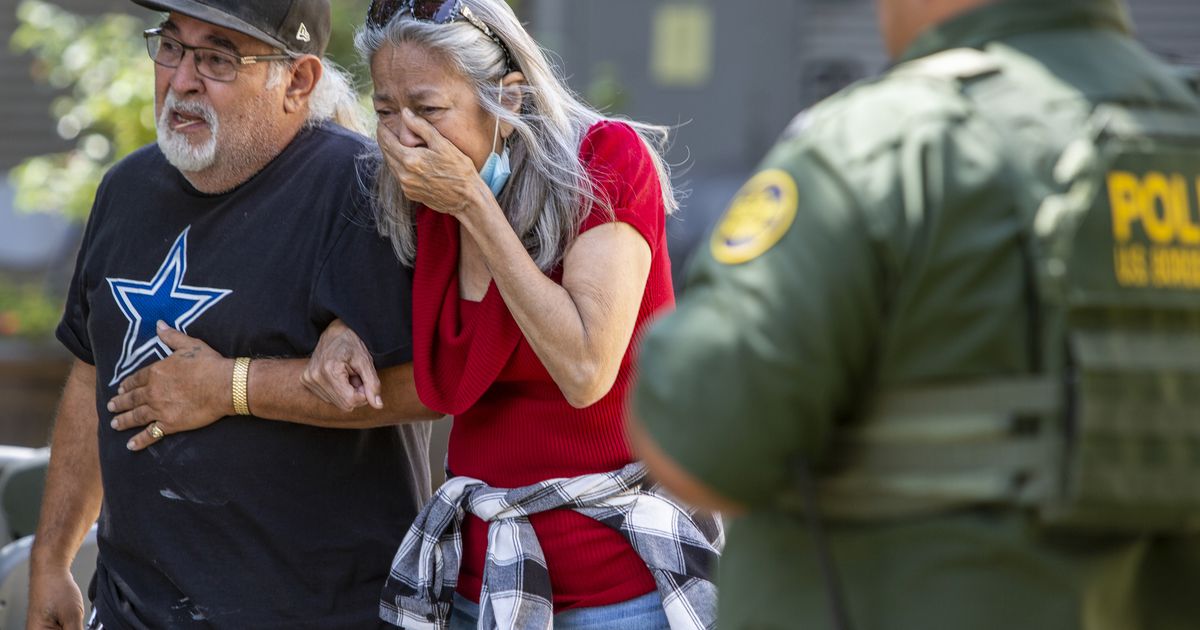 (William Luther | The San Antonio Express-News via AP) A woman cries as she leaves the Uvalde Civic Center, Tuesday, May 24, 2022, in Uvalde, Texas An 18-year-old gunman opened fire Tuesday at an elementary school in Texas, killing several children and a teacher and wounding others, Governor Greg Abbott said, and the shooter was dead.

In the past two weeks, the country has seen the two deadliest mass shootings of the year, both committed by 18-year-olds. The motive for Tuesday’s attack on school children in Uvalde, Texas is still unknown. But the motive for Buffalo’s attack is clear from the line screed left by the accused forward. Influenced by the “great replacement theory”, he sought to kill as many black people as possible. Ten died.

It’s terrorism by definition: the use of violence to intimidate or coerce a civilian population or influence government policy. In the United States, it is often accomplished using semi-automatic weapons.

Permissive gun laws and easy access to firearms make the United States a prime target for gun-based terrorist attacks like the one in Buffalo. They subject the population to the constant threat of mass shootings like the one in Uvalde, where 19 children and two adults were shot dead. Whether or not this shooting meets the legal definition of terrorism, it has certainly terrified people across the country, raising fears once again that children are threatened, even in their schools, with violence encouraged by the ready availability of semi-automatic weapons.

In Buffalo, the shooter was armed with a semi-automatic assault rifle. Authorities have yet to say whether the Texas shooter used a semi-automatic weapon or weapons; media reported that he bought two for his recent 18th birthday.

Along with dozens of former national security and law enforcement officials, I have warned of the dangers of “unfettered access to guns” in a brief filed with the Supreme Court in the latest firearms case before the judges, New York State Rifle & Pistol Association v. Brun.

This pending case concerns restrictions on the carrying of concealed weapons. But whether the weapon is concealed or not, there is no doubt that the ready availability of weapons in the United States challenges not only public safety but also national security. The United States must treat easy access to semi-automatic weapons as the threat it poses to national security.

Foreign terrorist organizations have long urged their followers to take advantage of lax US gun laws to plan attacks in the United States.

In 2017, an Islamic State propaganda video featured an allegedly American fighter, wearing fatigues and a gun holstered, urging sympathizers in the United States to “take advantage of the fact that you can easily get a gun or a gun in America” ​​and “pulverize” the infidels “with bullets”. A major American al-Qaeda recruit pressed potential recruits in a 2011 video for “going to a gun show at a local convention center and walking away with a fully automatic assault rifle with no background checks and most likely no ID showing. So What are you waiting for?” The people who killed 14 people in San Bernardino, California., in 2015, and 49 in Orlando, Florida.in 2016 – and pledged allegiance to the Islamic State – committed their carnage using semi-automatic firearms.

As the attacks clearly show, these types of military-grade weapons are not used only by those who carry out mass killings in the name of foreign terrorist groups.

The person charged in the Buffalo shooting got out of his vehicle outside the Tops supermarket looking like he was entering a war zone. He was wearing a bulletproof vest, tactical gear and a helmet. He carried a Bushmaster XM-15 semi-automatic rifle, modified to hold high-capacity magazines. He had a shotgun and a rifle in his car as backup.

Military-style weapons and equipment are also the calling cards of extremist private militias in the United States, whose anti-government ideology and Second Amendment insurgency outlook has led to increased intimidation and coercion.

Unauthorized and illegal, these private militias encourage their members to own assault rifles. They often wear military-style gear (similar to the Buffalo shooting suspect) and train in paramilitary techniques. Armed militiamen burst into state capitals in Boise, Idaho, and Lansing, Michigan. They usurped the role of law enforcement, claiming to protect the First Amendment rights of protesters at the “Unite the Right” rally in Charlottesville, Va., in 2017, and engaging in border surveillance patrols in Texas, in New Mexico and Arizona. Militia members were among those who attacked the U.S. Capitol on January 6, seeking to disrupt the Electoral College vote count, and Would’ve been ready to call in a heavily armed “quick reaction force” just outside Washington.

The concealed weapons case pending Supreme Court ruling presents the first major Second Amendment issue to be considered by justices since 2008. Although it involves a challenge to the validity of concealed carry restrictions on New York’s longtime contender, the arguments made by the challengers, if accepted, could call other gun safety restrictions into question. The signatories of the national security brief – including former career and politically appointed national security officials – have been united in urging the court to consider the threats to national security and public safety posed by easy access to firearms.

This warning is not new.

Nicholas Rasmussen, former director of the National Counterterrorism Center, warned as he resigned in 2017, “we find ourselves in a more dangerous situation because our population of violent extremists has no difficulty in accessing weapons that are quite lethal”. And at the beginning of 2021, Christopher Wray, the director of the FBI, Told a Senate committee that said racially motivated violent extremism was “the biggest part of our domestic terrorism portfolio” overall, along with the “militia violent extremist” trend.

Second Amendment absolutists like to say, “The only way to stop a bad guy with a gun is a good guy with a gun.” But a Tops supermarket security guard — a 30-year Buffalo police veteran — had a gun. He used it. But it was no match for a bulletproof vest and an assault weapon. National security and public safety require more than a good guy with a gun. They need effective regulation of access to these weapons.

Mary B. McCord, executive director of the Institute for Constitutional Advocacy and Protection at Georgetown University Law Center, served as the acting assistant attorney general for national security from 2016 to 2017 and as a federal prosecutor for 20 years. This article originally appeared in The New York Times.