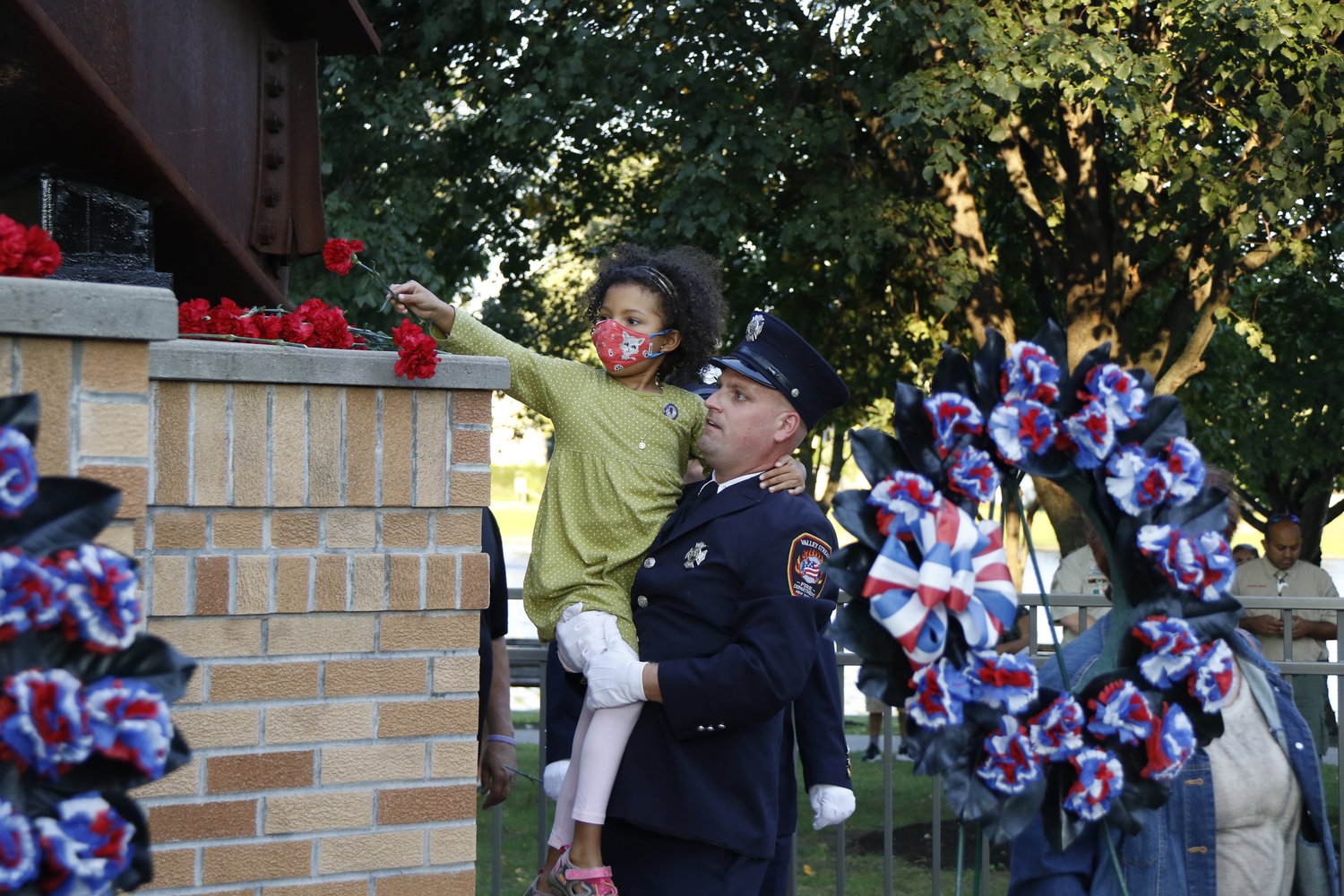 Last Saturday, religious leaders, a school principal, government officials and residents of the village gathered at the 9/11 Memorial in Arthur J. Hendrickson Park to remember the nearly 3,000 people who died in the terrorist attacks in September 11, 2001. Dozens stood solemnly under a brilliant blue sky, much like that of that morning in Lower Manhattan when the Twin Towers were struck by two hijacked planes and finally reduced to rubble.
The ceremony began with the handing over of the flags by members of the American Legion Post 854, the Veterans of Foreign Wars Post 1790 and the Boy and Girl Scouts of Valley Stream. Nassau County Court Judge Robert G. Bogle, the emcee, delivered a welcoming speech and Samantha Wright sang the national anthem. Reverend Steven Milazzo of the Bethlehem Assembly of God delivered the invocation.
“We’ve heard that true courage is like a kite, and a strong wind will always make it soar higher,” Bogle said. “President George Washington once said that courage is the price for which life demands freedom, and freedom is a blessing upon which all the good and evil of life depends. And the cause of this freedom will always be eternal vigilance. Today we pay tribute to those who answered the call that day. They gave America the last full measure of devotion in New York City, Washington, DC, and a dark plantation field in western Pennsylvania. It was a day that started with epic violence. It ended with unprecedented courage.
In his address to the crowd, Mayor Ed Fare said: “Twenty years ago today, the struggle of good versus evil was squeezed into one morning. In the space of 102 minutes, our country lost more citizens than in the attack on Pearl Harbor. Time has passed, but the memories do not fade as we meet again here on Patriot Day ”
He continued, “Most of you are well aware that I am an educator in the Valley Stream Central School District. Last week in the building behind us, I faced my seventeenth and eighteenth grade classes, and it hit me: none of them were born on September 11, 2001. For them, what s’ passed that day was a day in two-decade-old history. In our schools, in our homes, it is our job to educate them and all future generations [on] the importance and impact of a day that forever changed the world as you and I remember it … To our police officers, our firefighters, our deceased first responders, we thank you and we can never you forget for your service. For the families of the missing, we understand that while we all suffered losses that day, you carry a particular burden. Know that we are by your side and we always will be.
Memorial wreaths were placed around the 15-foot-long steel base from the ruins of the World Trade Center by the fire chiefs of the Valley Stream Fire Department, the Valley Stream scouts and the Cadet Corps of the New York Navy, as well as directors John Tufarelli and Sean Wright and Deputy Mayor Dermond Thomas. At the end of the ceremony, several residents solemnly stepped forward to lay flowers at the foot of the monument.