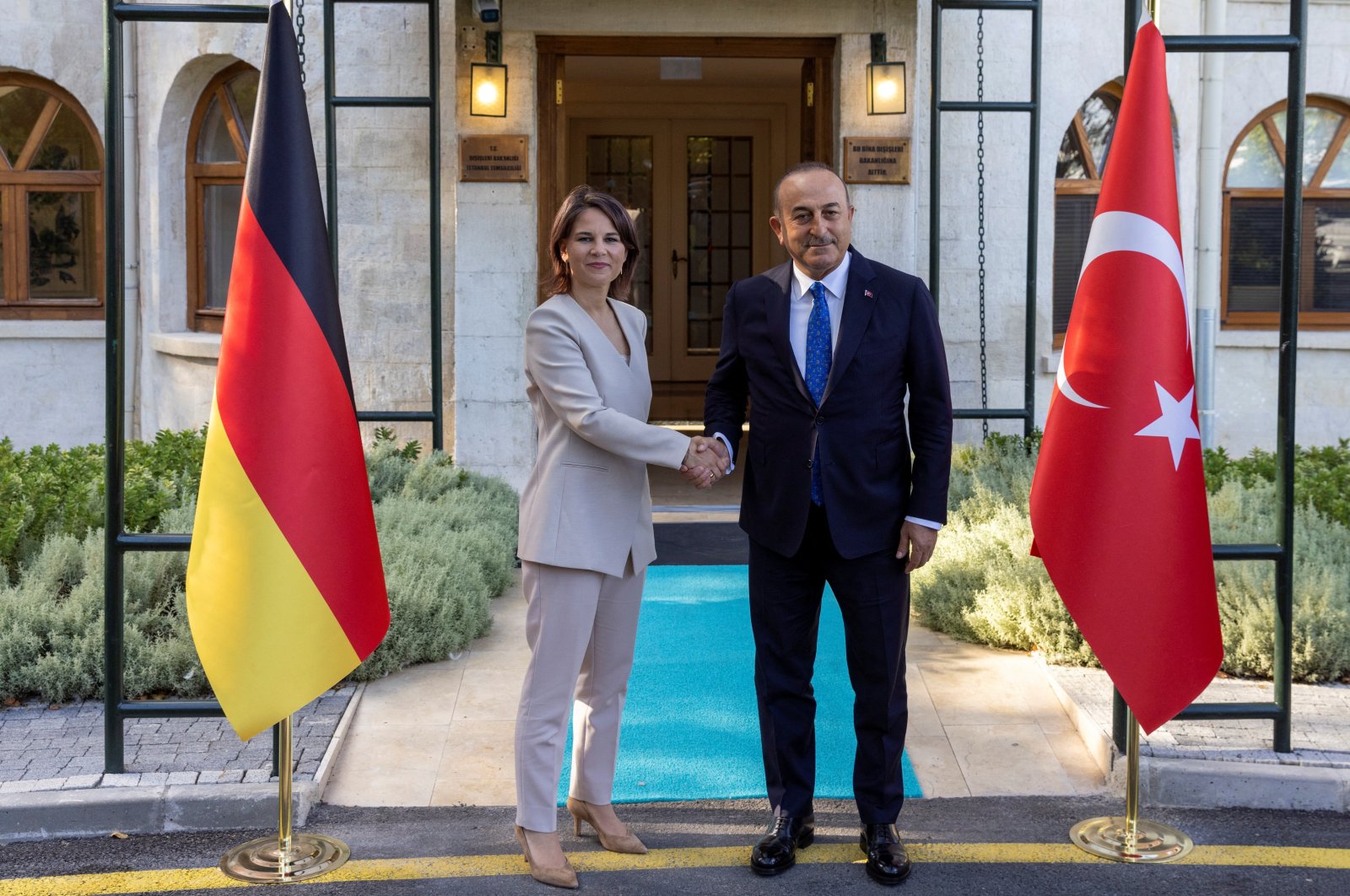 German Foreign Minister Annalena Baerbock visited the Republic of Turkey a few days ago, a well-received visit with high expectations from both sides, and met with Turkish Foreign Minister Mevlüt Çavuşoğlu. Baerbock is a successful German politician representing the Green Party who, in all likelihood, intends to step into the shoes of one of her predecessors, the late Hans-Dietrich Genscher, who as Foreign Minister of the Liberal Party (in office for almost 18 years) became famous for drawing friendly but slightly sarcastic comments from journalists, such as “Oh, M like Monday, he must be in Montevideo then”, taking into account his absence, being constantly on international duty but rarely seen at home.

Baerbock’s travel schedule, despite her relatively short time in office, looks impressive as last week she had wheels in Greece and Turkey shortly before heading to the United States and Canada.

Without neglecting the otherwise very positive atmosphere that unites Germany and Turkey with regard to all trade-related agenda items, the Ukrainian grain agreement and Turkey’s model efforts in migration are some of the issues that raised concerns before and during his stay and this brief analysis aims to clarify a number of them.

Admittedly, Greece is a member state of the European Union. But Turkey is a candidate country for the same institution. Thus, Berlin should be able to mediate when Athens and Ankara disagree on something and not take sides and always speak only in favor of Athens.

Doesn’t Berlin see the human rights violations orchestrated by the Greek authorities and as we now know documented by Frontex vis-à-vis the deportations of illegal migrants? Is he afraid to say it?

And it is not Ankara but Athens that is remilitarizing the islands near neighboring Turkey, a flagrant violation of international treaties. Does Berlin only listen to the Greek side? Has Baerbock possibly visited one of the islands she says are under threat from Turkey when the reverse is true as remilitarization is straining the local population of the Greek islands, who depend almost entirely from national and foreign tourism?

Coming back to the refoulement of illegal migrants, normally the defense of human rights is an essential concern for any democracy and no elected representative would hesitate to do everything possible to comply with universally accepted standards; Germany and Turkey are leading the way in this context.

That said, it is surprising that Berlin, to this day, has failed to realize the true nature of the so-called Gezi Park protests from 2013 onwards. Especially since the initially legitimate and peaceful arguments expressed by a small group of young people who sought to protect the environment were quickly taken hostage by violent groups within Turkish society – perhaps even with a foreign hand involved – ultimately planning to overthrow the democratically elected government. Furthermore, 2013 became the precursor to the brutal and heinous coup attempt three years later in 2016.

If a similar type of protest was no longer about protecting something (think the environment) but about destroying something (think democracy) would have happened in Berlin or, say, Frankfurt, and if an attempted coup similar state would have shaken the whole German nation, how would Berlin have reacted? Stand still, let the anarchists reign supreme and install a dictatorship along the way? I do not think so.

Therefore, Baerbock lecturing Ankara about Osman Kavala, ‘Turkey’s Soros’, who was behind the Gezi Park riots, and why he should be freed is, on the one hand, a mistake. of total judgment on what happened on the pitch in 2013 and 2016, respectively. But, on the other hand, it is, in principle, an interference in the judicial functioning of a sovereign, albeit friendly, partner State.

Observers in Turkey got the impression that Greece’s unilateral defense against Turkey, come what may, and the Osman Kavala affair are the most important issues that Berlin has put in the FM’s diplomatic pouch for so say. Are these really the two most urgent things Berlin could come up with?

Criticizing the future host country of the next leg of a trip abroad from the territory of a third country (in this case Greece) was certainly a diplomatic misadventure. Focusing on lecturing Turkey on the two issues mentioned above before even offering anything tangible in return is not really a notable diplomatic effort either.

The German Foreign Minister could easily have announced three points that Berlin would push the other capitals of the European Union to tick jointly. The first and the simplest: to allow citizens of the Republic of Turkey to travel to the Schengen area without the need for a visa and the humiliating and extremely long application procedures. Travelers from Turkey would come in large numbers to Schengen countries, but as tourists or business people and both groups would spend a considerable amount of money on their travels. And then back home. People would get to know each other better and the European economy and, in particular, tourism and trade would greatly benefit. A precise word on this subject of Baerbock?

The second point, although it requires a little more time for negotiations of the order of 6 to 12 months, is the modernization of the customs union to fully include agriculture, services and address the subject of scanning. If there was ever a potential win-win situation, we see one here. Any specific comments on this topic from Baerbock?

And last but not least, let’s get to the bigger picture – Turkey’s EU membership now and not in 50 or 60 years. And the logic and the best point to conclude is the year 2023, the year of the centenary. This does not need to happen on January 1, 2023, but by December 2023 the final roadmap could be agreed and between all remaining “chapters” ticked jointly. Already in the year 2006 analysts argued that Ankara could be fully ready for the EU within 24 months, then one roadblock after another was erected by Brussels and/or individual member states. Any specific suggestion on this topic from Baerbock?

Coming back to this point, there is another topic that Turkey would be so relieved to see Germany finally unplug from – stop tolerating supporters of the PKK terrorist network infiltrating German society through camouflaged associations and the media or even demonstrate in broad daylight. Germany’s own Office for the Protection of the Constitution only recently announced that 14,500 supporters are active on German soil and that 300 criminal activities are taking place alongside mostly illegal protests. One wonders how they can take place if they are illegal, but anyway.

The PKK is a threat to German security and has long since ceased to be a “problem in distant Turkey”. As Ankara works tirelessly to finish off the terror group, some core members have managed to flee to other countries, trying to regroup as they know over the decades thousands of followers have been allowed to ply their trade illegal in European countries, especially Germany. Money laundering, human trafficking and protection scams are among these activities. And if a terrorist no longer has the ability to wreak havoc in his country of origin, he might as well turn his back on the host country that shelters him and carry out terrorist attacks on the spot.

And to better understand the true nature of the HDP (People’s Democratic Party), which Baerbock met here in Turkey, she “forgot” to go to the city of Diyarbakır, where proud and steadfast mothers are organizing a sit-in in front of the local HDP office because they know who allowed their children to be transported to the PKK hidden in the mountains.

This would have sent a signal to those 14,500 PKK sympathizers in Germany – your time is up in Turkey but will be timed up in Germany too!

Hopefully the two Foreign Ministers will have the opportunity to meet again soon, the two nations should be partners by default. You are always welcome, Dear Baerbock!