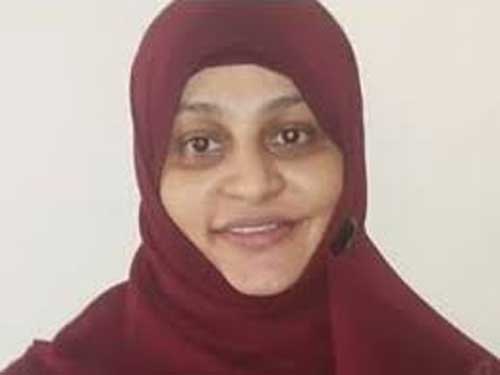 Bangalore, January 9 (IANS) Since the arrest of Deepthi Marla, aka Mariyum, accused of alleged links to ISIS by the National Investigation Agency (NIA) earlier this week in the Dakshina Kannada district of Karnataka, this has sparked a debate over ” Love Jihad ”in the state.

Hindu organizations have planned special campaigns and programs on the Karnataka coast through retired police officers, religious leaders and activists, among others in educational institutions and other places, to raise awareness of Love Jihad. They claim that Love Jihad is a reality and they get calls every day from parents of missing girls.

They explain that groups are formed to prevent Hindu girls from falling prey to Love Jihad and that students are being trained to closely observe suspicious movements on campus in academic institutions.

Leaders of the ruling BJP, which has already passed the anti-conversion bill in the assembly, openly state that they will also introduce legislation on Love Jihad. However, state congressman DK Shivakumar denied it, claiming that any legislation introduced by the Bharatiya Janata party targeting minorities would be thrown in the trash after his party came to power.

Deepthi Marla, a Hindu girl from Kodagu who married Anas Abdul Rahman after falling in love with him while studying BDS, converted to Islam and changed her name to Mariyum. Anas is the grandson of triple congressman BM Idinabba.

She later came into contact with the terrorist organization ISIS. She is also accused of recruiting local youth for ISIL.

The incident shocked the population of the state, especially in the communally sensitive coastal districts of Dakshina Kannada, Udupi and Uttara Kannada. Hindutva forces who protested Love Jihad claim that the case of Deepthi Marla is an example of Love Jihad and shows how Hindu girls are trapped in love, married, converted to Islam and then used against the community and the nation Hindu.

Senior lawyer S. Balan, explained to IANS: “Love Jihad is a phrase coined by right-wing elements after instructions from Nagpur and this venom is widespread throughout India, including the security forces, the police, the NIA, everywhere. They also invented it. like another phrase “urban naxals”. It is a false word created by elements of the right. “

“Jihad love in itself is punishable under Article 153A of the IPC for creating a wedge between two communities. This calls into question the basic structure of the constitution. How is Jihad of Love defined? A woman and a man can love, to marry it is their right, who has the right to declare that it is the Jihad of Love? “He asked himself.

Pramod Muthalik, the founder of Sri Ram Sena, told IANS that the term “Love Jihad” was coined by him in 2009. “I wrote my first book on the subject. The Hindu girls who left with the Muslims were found and brought back. They married Hindus. This is what is happening. Now the issue is being discussed across the country. Many states have adopted legislation in this regard. The issue has also reached the Supreme Court.

“Kerala is a big center of Love Jihad. Within four years 4,000 girls are targeted by Love Jihad, government documents indicate that among those 3,000 are Christian girls. Love Jihad is a reality. This is done to increase people and abuse Hindu girls and women. They marry and leave them after having children. They would be pushed into brothels and sold in Arab countries. They will also use them for terrorist activities, “he said. he assures.

“Our activists fought a lot to bring back the victimized Hindu girls. They managed to get the Hindu girls who were detained in the mosques out. The activists were assaulted and went to jail. six phone calls a day from people about their daughter’s flight. It is happening. We have formed squads in all the colleges and they are keeping watch, “Muthalik said.

Afsar Kodlipet, Secretary of State for the Social Democratic Party of India, said the concept of Love Jihad is a castle built in the air and a conspiracy of Sangh Parivar elements to target minorities.

“In 2009, the NIA came to Karnataka to investigate the alleged rape and murder of 37 women. It has been alleged that Hindu women were sexually used and forcibly converted to another religion as part of Love Jihad. After a detailed investigation, the NIA discovered the role of “he said.

TS Chandrashekar, international business analyst and BJP TV panelist, argued that Love Jihad is a reality. “In Kerala, fundamentalist elements will gather information about single and wealthy girls. They think that if they trap these girls, they will get resources as well. Poor and uneducated girls are not targeted. Only working and educated women are trapped. in love and later brainwashed. “

Sharan Pumpwell, Vishwa Hindu Parishad zone secretary in Dakshina Kannada, claimed that over the past 15 years, cases of Love Jihad have been on the rise. Every day, such cases are reported in the coastal region of Karnataka. Hindu girls are brainwashed and even become victims of sexual jihad. In Kerala, they target Catholic Christian girls.

“We are launching a campaign on January 17. Seminars are being held in colleges and religious leaders, caste leaders, retired police officers, activists are involved in the campaign to raise awareness of Love Jihad”, a- he declared.